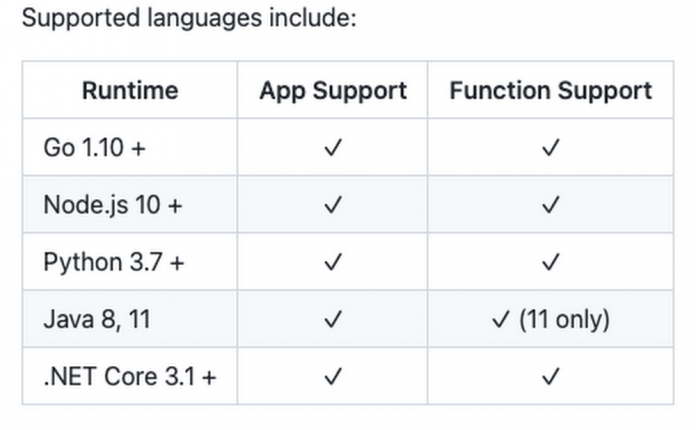 Until recently, this is how you deployed code to Cloud Run:

Back in December, we announced the beta release of source-based deployments for Cloud Run. This combines steps 2 and 3 above into a single command. Perhaps more importantly, it also eliminates the need for a Dockerfile for supported language versions.

Now you can finally go from source code to a running Cloud Run service with a single command and without having to worry about the complexities of creating a container image. It’s nice to finally see the Cloud Run deployment experience on par with Cloud Functions and App Engine.

Previously, here’s how I deployed the app, a simple .NET Core 3.0 web application.

First, I had to author a Dockerfile, which is not trivial for more complex applications.

Then, I built the container image with Cloud Build:

Finally, I deployed to Cloud Run:

Before trying the new deployment experience, I updated the app to .NET Core 3.1 and removed the Dockerfile.

Deploying the app is now a single command:

In the output, you can see that Cloud Run is using Google Cloud buildpacks to detect the type of the app, build a container using Cloud Build, and deploy to Cloud Run, all in one step:

This is almost magical!

The new deployment experience is great if your app is one of the language versions supported by Google Cloud buildpacks:

But what happens when the buildpacks do not support the language version of your app?

To find out, I created a .NET 5.0 version of the app and tried to deploy it. The build fails with an error and the Cloud Build logs provide a clue why:

The build is using the latest long-term supported (LTS) version of .NET Core 3.1.413 and my app is on .NET 5.0. This is expected. Not all builders will be able to support all versions.

Thankfully, there’s an escape hatch. I manually built a Dockerfile to use .NET 5.0 and tried building again with the source:

You can see that the Dockerfile is now used for building and the Cloud Run service is deployed with no problems.

Whether you want to deploy directly from source or with your custom Dockerfile, the new source-based deployment makes it really easy to go from code to a running Cloud Run service. Check out the documentation and feel free to reach out to me on Twitter@meteatamel for any questions or feedback.

Introducing a single command to build and deploy to Cloud Run

Now you can use Google Cloud Buildpacks to automatically convert your application code into a container image and deploy it to Cloud Run.

Sqlcommenter now extending the vision of OpenTelemetry to databases