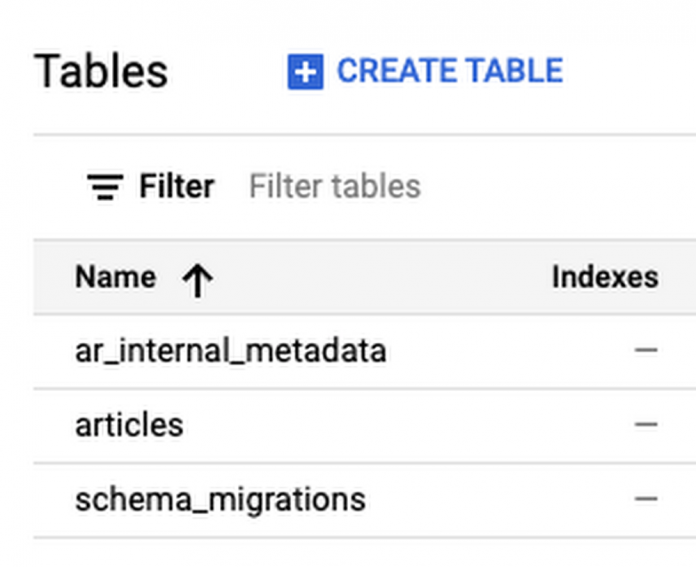 Even though Active Record is commonly used with a Rails project, it can be used with other frameworks like Sinatra or as a standalone library in your Ruby application. With the GA of the adapter, Ruby applications can now take advantage of Cloud Spanner’s high availability and external consistency at scale through an ORM.

The adapter is released as the Ruby gem ruby-spanner-activerecord. Currently, it supports:

In this post, we will cover how to start with the adapter with a Rails application and highlight the supported features.

To install the adaptor, edit the `Gemfile` of your Rails application and add the activerecord-spanner-adapter gem:

Next, run bundle to install the gem:

In a Rails app, you need to configure the database adapter by setting the Spanner project, instance, and database names. Since Cloud Spanner uses Cloud Identity and Access Management to control user and group access to its resources, you can use a Cloud Service Account with proper permissions to access the databases. The configuration changes can be made in the config/database.yml file for a Rails project.

Besides using a database in the Cloud, you can also use Google’s Cloud Spanner Emulator. The acceptance tests for the adapter run against the emulator. If needed, you can use the configuration in the Rakefile as an example.

Working with the Spanner Adapter

Once you have configured the adapter, you can use the standard Rails tooling to create and manage databases. Following the Rails tutorial in the adapter repository, you’ll see how the client interacts with the Cloud Spanner API.

Create a database with tables

First, you can create a database by running the following command:

Next, you can generate a data model, for example:

The command above will generate a database migration file as the following:

If you run migration with the file above, it will indeed create an `articles` table with two columns, `title` and `body’:

After migration completes, you can see the tables Active Record created in the GCP Cloud Spanner Console:

Alternatively, you can inspect `information_schema.tables` to display the tables Ruby created using the Google Cloud SDK:

Interact with the database using Rails

After the database and tables are created, you can interact with them from your code or use the Rails CLI. To start with the CLI, you

This command will start a command prompt and you can run Ruby code within it. For example, to query the `articles` table:

You can see a `SELECT` SQL query runs under the hood. As expected, no record is returned since the table is still empty.

At the prompt, you can initialize a new `Article` object and save the object to the database:

You can see the adapter creates a SQL query to start a transaction and insert a new record into the database table.

If you review the object, you can see the field `id`, `created_at`, and `updated_at` have been set:

You can also modify existing records in the database. For example, you can change the `article` body to something else and save the change:

This code results in an `UPDATE` SQL statement to change the value in the database. You can verify the result from the Spanner console under the `Data` page:

The adapter supports the Active Record Query Interface to retrieve data from the database. For example, you can query by the `title` or `id` using the following code. Both generate corresponding SQL statements to get the data back:

For instance, if you want to add two new columns to an existing table, you can create a migration file using the `rails generate migration` command:

The command will produce a migration file like the following one:

Finally, you can run the `rails db:migrate` command to commit the schema change:

Again, you could verify the change from the Spanner console:

Sometimes when you need to read and update the database, you want to group multiple statements in a single transaction. For those types of use cases, you can manually control the read/write transactions following this example.

If you need to execute multiple consistent reads and no write operations, it is preferable to use a read-only transaction, as shown in this example.

Commit timestamp columns can be configured during model creation using the `:commit_timestamp` symbol, as shown in this example. The commit timestamps can be read after an insert and/or an update transaction is completed.

Depending on the transaction type, the adapter automatically chooses between mutations and DML for executing updates. For efficiency, it uses mutations instead of DML where possible. If you want to know how to use the `:buffered_mutations` isolation level to instruct the adapter to use mutations explicitly,  you can read this example.

Cloud Spanner supports various statement hints and table hints, which are also supported by the adapter. This example shows how to use the `optimizer_hints` method to specify statement and table hints. You can also find a join hint in the example, which cannot use the method but a join string instead.

Cloud Spanner provides two read types. By default, all read-only transactions will default to performing strong reads. You can opt into performing a stale read when querying data by using an explicit timestamp bound as shown in this example.

The adapter has a few limitations. For example, it doesn’t auto-generate values for primary keys due to Cloud Spanner not supporting sequences, identity columns, or other value generators in the database. If your table does not contain a natural primary key, a good practice is to use a client-side UUID generator for a primary key.

We recommend that you go through the list of limitations before deploying any projects using this adapter. These limitations are documented here.

We’d love to hear from you, especially if you’re a Rails user considering Cloud Spanner or an existing Cloud Spanner customer who is considering using Ruby for new projects. The project is open-source, and you can comment, report bugs, and open pull requests on Github.

We would like to thank Knut Olav Løite and Jiren Patelfor their work on this project.

Before you get started, you need to have a Rails project. For a complete example, you can find it in the gem’s GitHub repo or

Community tutorial for Spanner and Active Record on Medium.

Enabling Python SQLAlchemy applications to use Google Cloud Spanner as a database.

The Chain Rule of Calculus for Univariate and Multivariate Functions