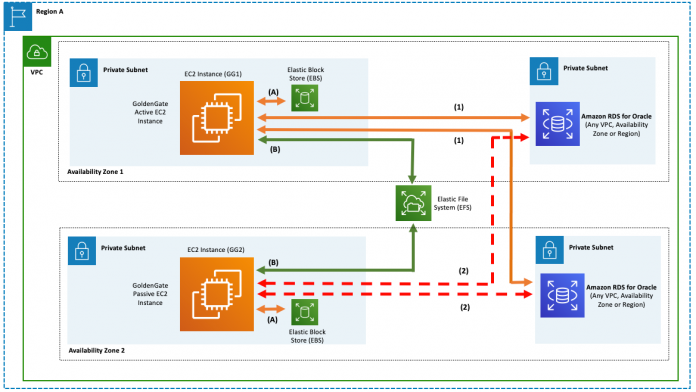 The need to move data from one location to another in an asynchronous manner is a goal for many enterprises. Use cases might include migrating data to a reporting database, moving applications from on premises to the cloud, storing a redundant copy in another data center, configuring active/active databases across geographic locations, and performing heterogeneous database migrations (migrating data from Oracle to PostgreSQL). For many of these use cases you can use database replication tools such as AWS Database Migration Service (AWS DMS) or Oracle GoldenGate.

Failures are a given and everything will eventually fail over time. In addition to the databases being highly available, the database replication tool should be highly available. In this post, we show you how to configure a high availability GoldenGate environment to replicate data between two Amazon Relational Database Service (Amazon RDS) for Oracle instances.

Oracle GoldenGate asynchronously replicates data between databases. These databases can reside on premises or in the cloud. The databases can be self-managed or a cloud managed service, such as Amazon Relational Database Service (Amazon RDS). Oracle GoldenGate supports many different databases, including, but not limited to, Oracle, Amazon Aurora MySQL, Amazon Aurora PostgreSQL, Amazon RDS for Oracle, and Microsoft SQL Server.

In addition to migrating data and keeping two or more databases in sync, you can use GoldenGate to upgrade to a new major version of Oracle. GoldenGate bi-directional replication can enable database migrations and database upgrades with near-zero downtime.

You can use GoldenGate within an AWS Region or across multiple Regions. The following are some relevant use cases:

The RDS for Oracle instances should have Multi-AZ enabled to provide high availability for the RDS instances. In case of an infrastructure failure, Amazon RDS performs an automatic failover to the standby database, so you can resume database operations as soon as the failover is complete. Because the endpoint for the database instance remains the same after a failover, your application can resume database operation without the need for manual administrative intervention.

GoldenGate creates required subdirectories through the GoldenGate Software Command Interface (GGSCI). The create subdirs command is issued from GGSCI and subdirectories are created in the GoldenGate home directory (in this case, an Amazon EBS volume). However, because these files must be shared via Amazon EFS, you shouldn’t run the create subdirs GGSCI command. Instead, you must create symbolic links (also known as soft links) that point to Amazon EFS. There is a two-step process to create the required 15 symbolic links.

First, create the subdirectories on Amazon EFS. The following code shows the commands to create the subdirectories. You should run these commands using the operating system user that installs GoldenGate (typically named oracle). This operating system user is not the root user and doesn’t require root privileges. For more information about required privileges, see Operating System Privileges.

Second, create the symbolic links from the GoldenGate home directory:

The symbolic links appear as illustrated in the following screenshot.

The higher level gg directory can’t be symbolically linked. The symbolic links must only be created for the dir* directories shown in the preceding screenshot. There are files specific to the GoldenGate installation that must not be shared across GoldenGate environments, specifically, GoldenGate error logs, GoldenGate libraries, and GoldenGate executables.

Symbolic links are supported for GoldenGate subdirectories. Oracle has published a My Oracle Support (MOS) document validating this configuration. The MOS Doc ID is 1366597.1 and is titled “How to Modify the Location for Subdirectories Created by CREATE SUBDIRS In GoldenGate?”

You need to run the GoldenGate hub on EC2 instances. The instances must have adequate CPU, memory, and storage to handle the anticipated replication volume. After you determine the CPU and memory requirements, select a current generation EC2 instance type for the GoldenGate hub. Current generation instance types, such as instances built on the AWS Nitro System, support hardware virtual machines (HVM). HVM Amazon Machine Images (AMI) are required to take advantage of enhanced networking and also offer increased security. The following virtualized instances are built on the Nitro System and are recommended for GoldenGate hubs: C5, M5, R5, R5b, T3 and z1d.

If the minimum memory requirement for GoldenGate is not met, when a GoldenGate process starts, the process abends and errors may not be logged. Therefore, ensure that enough memory has been allocated using the following calculations:

Therefore, to set up GoldenGate bi-directional replication on an EC2 instance, at least 1.4 GB of memory is required for GoldenGate. This calculation includes one manager process, two extract processes, and two replicat processes. Because the hub is handling the extract and replicat processes, the pump process isn’t required.

Remember, don’t run the create subdirs GGSCI command. Instead, create symbolic links that point to Amazon EFS, as we described in the previous section.

To replicate a single table (jobcode) in a specific schema (hr) using GoldenGate bi-directional replication, refer to the following DDL statements and GoldenGate parameter files. You should run all DDL and DML statements using the hr Oracle database user. Database administrative privileges are not required to create and manipulate the HR.JOBCODE table. You can connect to the Amazon RDS for Oracle instance using Oracle SQL*Developer, SQL*Plus or your preferred tool.

Create a table in the database using the following commands:

Edit the GoldenGate manager parameter file from the GoldenGate home directory. The user can edit the file directly from the OS or using GGSCI with “edit param mgr”. These parameters identify the valid ports and allows GoldenGate to delete old trail files after confirming that Manager has processed all of the data within the trail file.

Create the first extract parameter file for the first RDS for Oracle instance. Parameter descriptions can be found in GoldenGate documentation.

Create the second extract parameter file for the second RDS for Oracle instance.

Create the first replicat parameter file for the first RDS for Oracle instance.

Create the second replicat parameter file for the second RDS for Oracle instance.

We use the USERIDALIAS command in the parameter files. We recommend using a GoldenGate credential store as an alternative to storing usernames and passwords in plain text parameter files.

Issue multiple DML statements (inserts, updates, deletes) against the hr.jobcode table on database one. Don’t use the GoldenGate administration user (OGGADM1) to issue the DML statements.

Validate all modifications were properly synchronized between the databases.

The following diagram shows the expected records for the hr.jobcode table in both databases.

At this point, GoldenGate isn’t running on either EC2 instance. If data is modified in either RDS for Oracle instance while the GoldenGate instances are down, the data is synchronized after the GoldenGate processes are started on one of the EC2 instances. The GoldenGate trail files are stored in Amazon EFS. Amazon EFS file systems are elastic, and automatically grow and shrink as you add and remove files. You do not provision file system size up front, and you pay only for what you use. GoldenGate knows which files were processed and trail files that have not been processed will not be purged. If GoldenGate is not started within a specific period, the trail files that have not been fully processed will still reside in Amazon EFS.

The following diagram shows the expected records for the hr.jobcode table in both databases.

You should also set up CloudWatch alarms for AWS CloudTrail events. For example, a CloudWatch alarm should be triggered when configuration changes occur on security groups. This alerts the operations team when someone attempts to gain access to the GoldenGate EC2 instances.

We recommend using CloudWatch Logs to store logs (including the GoldenGate error logs). For security purposes, make sure the HOSM (execution) role used is following the least privilege design. We suggest only giving access to PutLogEvents to the EC2 instances.

Marvin Vinson is an Oracle Database Specialist for AWS. He works in the Worldwide Public Sector (WWPS) organization. He is focused on migrating Oracle workloads to AWS.

Use Docker containers to deploy Graph Notebooks on AWS

The new CS_SESSION package and DB_NOTIFICATIONS view in the Autonomous Database

Of hacks and patches

So you want to be a Web3 developer

Visualize your AWS Infrastructure with Amazon Neptune and AWS Config