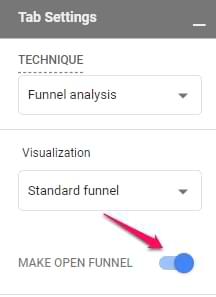 One of the welcome improvements in Google Analytics 4 (compared to the previous version) is Funnel Exploration. In the past, the funnel visualizations were inflexible and if you messed anything in your configuration, your data remained corrupted.

This has changed with GA4 when the possibility of ad hoc funnels was finally developed. This means that you can build funnels in various ways and use historic data in them.

Among various options of this type of analysis, there is one that I would like to dive deeper into. Open funnel vs closed funnel.

By the way, if you want to learn even more about funnels, read this blog post (+ watch the video).

Where can I find this feature?

In this blog post, I presume that you already know how to start funnel analysis (meaning that you have to go to Explore > Funnel Exploration).

By default, Funnels in Google Analytics 4 are closed. This means that if a visitor enters the funnel at the 2nd (or further) step, he/she will not be counted in a funnel.

But if it’s ok for you if a visitor/user enters the funnel *at any step*, then you can click the Make open funnel toggle to allow that.

“Open funnel vs closed funnel” affects how data is calculated

On the other side, open funnels allow visitors/users to enter the funnel at any step (not just the first one).

The dropoffs in the funnel exploration report are counted when a visitor does not proceed to another step. If a visitor/user enters the funnel in the 1st step, then skips the 2nd step, and then completes the 3rd funnel step, that last step will not be counted and the drop-off will be seen after the 1st step.

To make things a bit easier to understand, I have prepared a visual example. These situations were taken from Google’s documentation and I visualized (thus hopefully made things clearer).

Google Analytics 4 property has tracked 4 users. And I have configured a funnel that consists of 3 steps. In the table below, you will see how each user completed the steps.

Now, let’s take a look at how Google Analytics 4 will treat these actions when it comes to funnel exploration. Which steps will be counted?

First, let’s start with the open funnel. The green checkmark shows which step will be counted in the funnel exploration report. Red X shows which one will not.

The reason we have so many green checkmarks is that this is an open funnel. Visitors/users can enter the funnel at any step.

The reason why User 3’s Step C was not counted is that the user skipped step B. In GA4 funnel exploration, funnel steps cannot be skipped.

If we visualize this funnel with my poor design skills, it would look like this (also, I’ve labeled which user is counted where):

Those who enter the funnel at a later step are displayed in a separate rectangle added on top of the existing bar in the chart.

Now, let’s take a look at the closed funnel. The users and how they completed funnel steps are the same as it was with the open funnel but the funnel report is different

Hopefully, this quick guide helped you understand how data is calculated when you select either open or closed funnel in your analysis. If you want to learn more about the Funnel Analytics in general, go read this blog post too.