How to test recipe functions 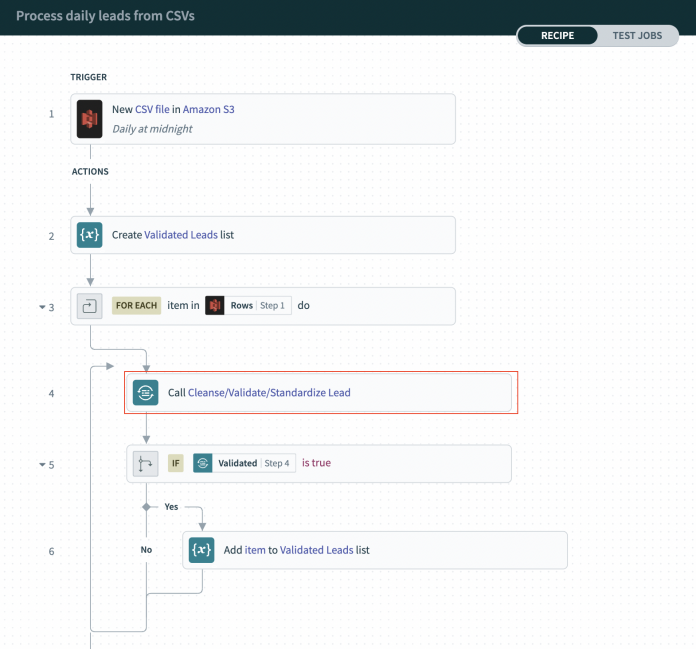 Testing early and often is vital to effective recipe design. Builders in Workato use test mode to safely test recipes as they’re building, testing not just a completed recipe, but each new or updated step. Testing this way makes it:

To make it even easier to test as you build, we’re excited to announce a new method for testing recipe functions.

Recipe functions are a special kind of recipe that help you to apply modular design principles to your automations. Instead of being triggered by an event, or on a particular schedule, recipe functions only run when they are “called” from a parent recipe.

For example, this recipe calls a recipe function in order to cleanse, validate and standardize lead data from a CSV file.

How to test a recipe function

When editing any recipe function, click Test, as you would with any other type of recipe.

In the modal window that appears, add some sample data to test the recipe with. The data you need to provide is determined by the recipe functions input schema. Click Test.

The test view will show the results of your test, including the final output of the function, if the test was successful.

This recipe is designed for cleansing and validating data, so we want to test it against all the different varieties of incorrect data we might encounter. For this purpose, we can use the raw JSON view of the trigger modal.

This view shows the trigger data in JSON format.

Using this format, you can easily develop a set of tests to check all of the different conditions you expect your recipe to be able to handle. You can even design your tests before you begin building your recipe.

The post How to test recipe functions appeared first on Workato Product Hub.

How to Format Slack Messages l Workato for Beginners

Update on Google Cloud’s Work with the U.S. Government