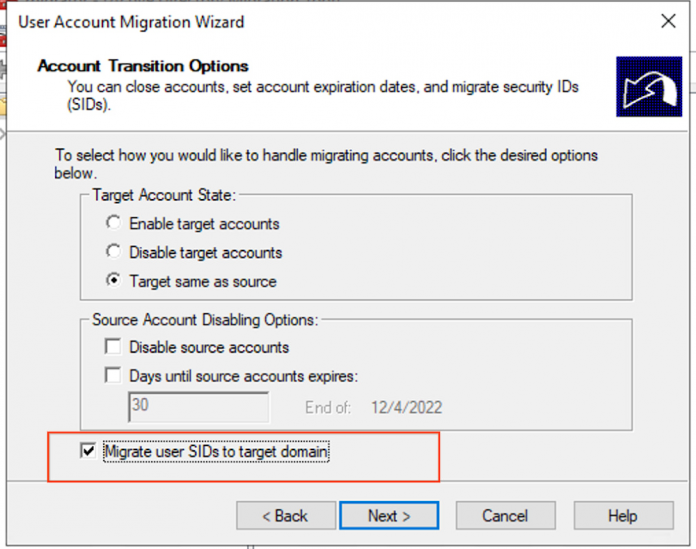 Most organizations adopting Managed Microsoft AD will be migrating from an existing on-premises AD deployment. Typically, when migrating Active Directory objects, existing users cannot continue to access resources in the new domain unless security identifier (SID) history is preserved. This can lead to additional work for administrators as the permissions need to be recreated post migration.

To make migrations more seamless and eliminate extra effort, we are excited to announce a new capability in Managed Microsoft AD: support for the migration of AD users with SID history, now available in Preview. Now, users can retain historic Access Control List (ACL) entries so that users can access resources without having to recreate resource permissions post-migration.

To get started, you can use Active Directory Migration Tool (ADMT) to migrate an on-premises AD domain to Managed Microsoft AD specifically with SID history.

As a prerequisite for migration, users need to set up a two-way trust between existing on-premises AD domain and new Managed Microsoft AD domain.

As a next step, install and set up Microsoft Active Directory Migration Tool (ADMT) and Microsoft SQL Server 2016 Express on a Google Compute Engine Virtual Machine. You need to make sure that this VM is not a domain controller and then join the VM to Google Cloud Managed Microsoft AD domain.

For more information, see Enable permissions for migrating an on-premises domain with SID history and also ensure you understand these security implications.

Note: It is recommended to run the PES service only when you migrate passwords.

Now that users have the environment ready and the required permissions enabled, migrate the AD users & groups along with the SID history. Users will have to use the User Account Migration Wizard in the ADMT tool. For detailed steps, please refer to the ADMT guide. In this wizard,  select the “Migrate user SIDs to target domain” option on the Account Transition Options page.

Note: You may want to migrate other AD objects as well, so as a best practice, we recommend that you maintain a migration checklist and verify managed objects in the checklist post-migration.

The migration process window will show the status of how many users, groups and computers have been migrated. You can click on “View Log” to examine the migration logs for errors and check the details of the operations.

After the migration process is completed, verify that the users exist in the Managed Microsoft AD domain using the Active Directory Users and Computers tool. Users can also use the AD login to verify that the access is set up correctly and verify that users can login successfully with resource permissions based on the SID history.

Now users have successfully migrated AD objects including users along with SID history from  on-premises AD domain to a new Managed Microsoft AD domain. After successful migration, we recommend disabling the user permissions that was enabled for migration.