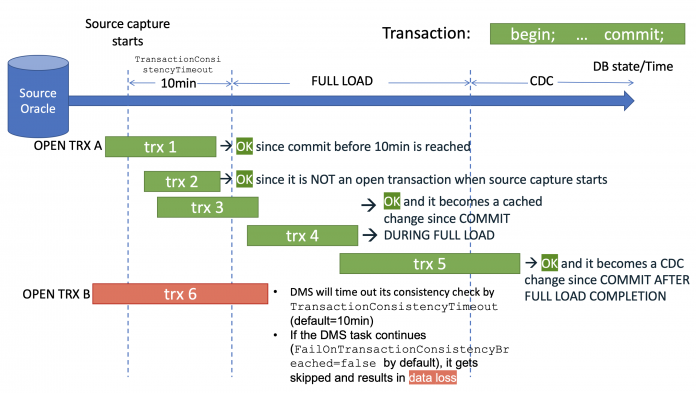 For a relational database management system (RDBMS), consistency is one of the crucial properties of a transaction – it defines the rules for maintaining data points in a correct state after a transaction. The consistency of the data ensures that transactions only make changes to tables in predefined, predictable ways thereby preventing unintended consequences for the integrity of your data. For a typical migration approach from an RDBMS with reduced downtime, a consistent snapshot should first be taken from the source database. Then a transaction position from where the consistent snapshot was taken should be recorded in order to establish replication to be continuously consistent with the source database. Conceptually, if there are any gaps or missing transactions between the snapshot and the start of the replication, the target database of the migration won’t be consistent.

The following are some typical questions about TransactionConsistencyTimeout depending on your source database:

To answer these questions, let’s look at what open transactions mean in AWS DMS.

An open transaction in AWS DMS is a transaction in the source relational database that hasn’t committed or rolled back when the AWS DMS full load and CDC task start. Similarly, when using the migration approach mentioned earlier, AWS DMS needs a consistent state for the initial bulk load to start and the transaction position for CDC. Because different RDBMS engines implement transaction logs differently, AWS DMS also behaves differently for various RDBMS sources. In the following sections, we look at how AWS DMS handles open transactions for Oracle, SQL Server, PostgreSQL, and MySQL as the source.

How AWS DMS handles open transactions for an Oracle source

In the following example graph, when the full load and CDC task starts, there are two open transactions identified by the AWS DMS source capture process, out of six transactions total:

The following log shows an example of typical AWS DMS log signatures when there is an open transaction. The SOURCE_CAPTURE component identifies the number of open transactions, and SORTER prints a warning for transaction consistency timeout after TransactionConsistencyTimeout.

Similarly, when the full load and CDC task starts using SQL Server as source, if there are any open transactions, AWS DMS SOURCE_CAPTURE identifies and prints logs as follows:

For the READ COMMITTED isolation level when READ_COMMITTED_SNAPSHOT is OFF, which is the default isolation in SQL Server, the statements aren’t allowed to read data that has been modified but not yet committed by other transactions. As a result, for a table with open transactions that is being migrated by a full load and CDC task, select * from the exact table is blocked until the active transactions of that table in the task scope get committed or roll back. If an open transaction is on the table that isn’t in the task scope, AWS DMS waits for some time and then starts the task. AWS DMS doesn’t wait for commit or rollback to start the full load and CDC task, and it doesn’t make any difference.

As a result of this behaviour, there is no data loss. However, the full load and CDC task are constantly in a Before load state until the open transactions associated with the table in the task scope commit or roll back.

How AWS DMS handles open transactions for a PostgreSQL source

[SOURCE_CAPTURE ]E: Could not find any supported plugins available on source (postgres_plugin.c:269)

How AWS DMS handles open transactions for a MySQL source

The following are best practices for handling open transactions:

Data loss is undesirable for any database migration project. In this post, we described open transactions and how AWS DMS handles them when starting a full load and CDC task for different database engines. We shared best practices to follow during the planning and running of AWS DMS tasks to avoid open transaction-related issues.

If you have any questions or suggestions, leave a comment.

Wanchen Zhao is a Partner Solutions Architect at AWS

Rishi Raj Srivastava is a database engineer with the AWS DMS team at Amazon Web Services.

Sudip Acharya is a Consultant with the AWS ProServe team in India. He works with internal and external Amazon customers to provide guidance and technical assistance on database modernization projects, helping them improve the value of their solutions when using AWS. His passion is to design and implementation of database or migration related tools.

Writing results from an Athena query to Amazon DynamoDB