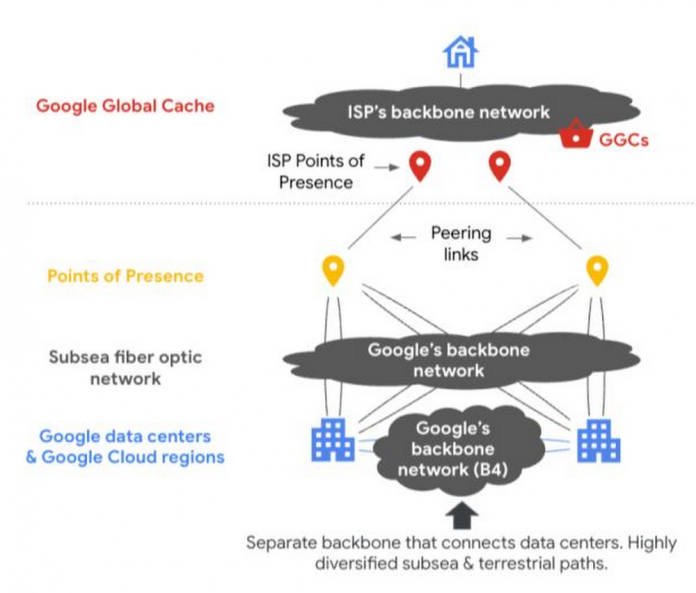 Every video shared, every email sent and app downloaded depends on data traffic that moves through international network infrastructure. How is this content magically available to people within milliseconds? It’s thanks to a rich ecosystem of companies and local providers who build global infrastructure that provides businesses and people around the world with the best possible experience for browsing, video conferencing, streaming, and much more. At Google, this work ranges from building and operating highly secure data centers and network “highways” traversing the globe, to maintaining the Google Global Cache that stores popular content near its users.

When we talk about “traffic,” we’re referring to the video, emails, and information moving from Google to consumers — and from Google Cloud to customers. Just like traffic in a city, the more homes you build, the more you need to improve the roads so that people can use them to travel and commute. If you don’t, congestion increases, and people start traveling on indirect, smaller roads, making traffic worse!

The Internet works in a very similar way. Today, bundles of glass fibers serve as the main “roads” for all the digital content that the internet carries, and on top of those roads, we build additional services and infrastructure to direct, process and store that data along the path to its destination. Read on to learn about the many investments we make to bring content closer to our users, customers, and our customers’ end users, so they can enjoy a better internet experience.

The foundational infrastructure that makes Google’s global reach possible is our network of fiber optic cables that run on both land and sea, and connect our data centers and points of presence (POPs), like highways connecting major cities. Over the years, we’ve invested heavily in working with partners around the world to build and lease fiber optic cables, for example, the Firmina, Apricot and Topaz subsea cables. These cables help connect Google’s infrastructure together and bring content closer to end users.

We often work with telecom companies to build and operate subsea cable projects. This includes our partnerships with Orange (Dunant cable), Sparkle (Blue and Raman cables) and Société d’infrastructures numériques and CSquared (Equiano cable in Togo). We also buy fiber pairs from telcos to ensure redundancy and resiliency in our networks.

Having sufficient capacity ensures that we can have a mesh network, with multiple cable connections between various countries and continents. This protects against occasional physical damage to a cable, most often due to fishing trawlers and ship anchors (and not shark attacks, contrary to popular belief!). The best protection against this kind of potential disruption is to build multiple diverse network paths.

Google’s networks connect to data centers and cloud regions around the world that serve as the computing engines for our products and services. It’s in these Google data centers that we run products like Search, Gmail, and YouTube for people around the world, helping keep the internet humming 24 hours a day, seven days a week. Google Cloud Platform regions provide businesses and organizations with the compute power and services they need to digitally transform, innovate across their industries, and drive operational efficiencies for long-term growth.

Even though we continue to expand our network and add data center and cloud region locations globally, some of our customers and users are geographically quite far from Google’s nearest data center or cloud region. Imagine having to drive eight hours to simply watch a video, read an email message, or join a Meet with a colleague or friend! To address this, we’ve built hundreds of POPs around the world to bring content closer to local internet service providers (ISPs) and, in turn, end users. Traffic flows over our dedicated network, optimized for speed and reliability until it reaches these POPs. From there, in exchange for their subscribers’ fees, ISPs handle local delivery to customers who have requested that content.

Another piece of the puzzle is peering, otherwise known as interconnection, where Google exchanges traffic with local ISPs. To view a video on YouTube or to upload it to YouTube from your home, ISPs carry that video from our network to theirs, and then along the “last mile” to your home or your mobile device, over the subscription that they provide to end users.

This handover of responsibility between ISPs, content providers, academic networks, or any network that is participating in the internet, usually happens in a common location called a colocation facility. Each participant bears its own costs of bringing information to the colocation facility, where they send and receive traffic to help users access internet content. These colocation facilities are not Google’s data centers, nor are they ISP-owned data centers. It is generally a neutral facility that is accessible by many different operators. It serves as a mutual rendezvous point for networks, where your ISP’s road meets Google’s road. It is also a great location to build a POP with peering capabilities.

In addition to investing in our POP facilities to bring content closer to ISPs and end users, Google also maintains a voluntary program called Google Global Cache (GGC) that allows ISPs to host caches that serve Google traffic within their own network. These caches temporarily store static content that is popular with the ISP’s subscribers. This allows ISPs to retrieve this content from within their own network, thus avoiding the need to carry the traffic from a Google POP to their network. In other words, it helps to reduce “road” congestion, improving the ISPs’ subscribers’ experience and enabling ISPs to reduce their costs.

In short, data traffic travels a long and winding road between its origin and its final destination — the end user’s computer or device — and Google contributes to building and helping maintain much of that road, alongside partners and other internet technology companies. We hope this post is helpful in understanding how internet content is delivered to end users around the world.

Azure Kubernetes doubles down on WebAssembly