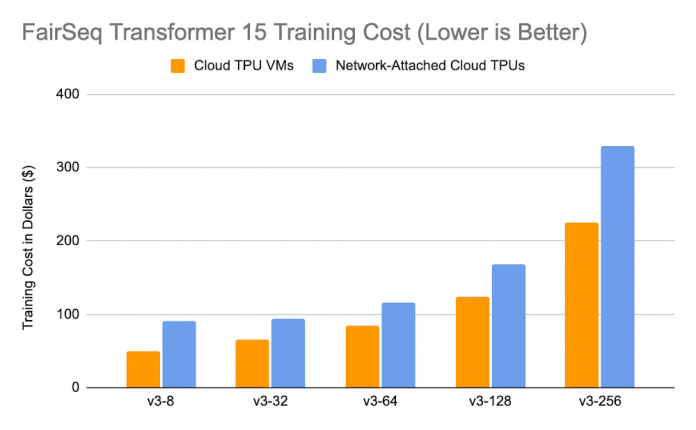 Earlier last year, Cloud TPU VMs on Google Cloud were introduced to make it easier to use the TPU hardware by providing direct access to TPU host machines. Today, we are excited to announce the general availability (GA) of TPU VMs.

With Cloud TPU VMs you can work interactively on the same hosts where the physical TPU hardware is attached. Our rapidly growing TPU user community has enthusiastically adopted this access mechanism, because it not only makes it possible to have a better debugging experience, but it also enables certain training setups such as Distributed Reinforcement Learning which were not feasible with TPU Node (networks accessed) architecture.

What’s new for the GA release?

Cloud TPUs are now optimized for large-scale ranking and recommendation workloads. We are also thrilled to share that Snap, an early adopter of this new capability, achieved about ~4.65x perf/TCO improvement to their business-critical ad ranking workload. Here are a few highlights from Snap’s blog post on Training Large Scale Recommendation Models:

> TPUs can offer much faster training speed and significantly lower training costs for recommendation system models than the CPUs;
> TensorFlow for cloud TPU provides a powerful API to handle large embedding tables and fast lookups;
> On TPU v3-32 slice, Snap was able to get a ~3x better throughput (-67.3% throughput on A100) with 52.1% lower cost compared to an equivalent A100 configuration (~4.65x perf/TCO)

With the TPU VMs GA release, we are introducing the new TPU Embedding API, whichcan accelerate ML Based ranking and recommendation workloads.

Many businesses today are built around ranking and recommendation use-cases, such as audio/video recommendations, product recommendations (apps, e-commerce), and ad ranking. These businesses rely on ranking and recommendation algorithms to serve their users and drive their business goals. In the last few years, the approaches to these algorithms have evolved from being purely statistical to deep neural network-based. These modern DNN-based algorithms offer greater scalability and accuracy, but they can come at a cost. They tend to use large amounts of data and can be difficult and expensive to train and deploy with traditional ML infrastructure.

Embedding acceleration with Cloud TPU can solve this problem at a lower cost. Embedding APIs can efficiently handle large amounts of data, such as embedding tables, by automatically sharding across hundreds of Cloud TPU chips in a pod, all connected to one another via the custom-built interconnect.

To help you get started, we are releasing the TF2 ranking and recommendation APIs, as part of the Tensorflow Recommenders library. We have also open sourced DLRM and DCN v2 ranking models in the TF2 model garden and the detailed tutorials are available here.

Local execution on the host with the accelerator, also enables use cases such as Distributed Reinforcement Learning. Canonical works in this domain such as seed-RL, IMPALA and PodTracer have been developed using Cloud TPUs.

With direct execution on TPU VM, users can now build their own custom ops such as TensorFlow Text. With this feature, the users are no longer bound to TensorFlow runtime release versions.

What are our customers saying?

“Over the last couple of years, Kakao Brain has developed numerous groundbreaking AI services and models, including minDALL-E, KoGPT and, most recently, RQ-Transformer. We’ve been using TPU VM architecture since its early launch on Google Cloud, and have experienced significant performance improvements compared to the original TPU node set up. We are very excited about the new features added in the Generally Available version of TPU VM, such as Embeddings API, and plan to continue using TPUs to solve some of the globe’s biggest ‘unthinkable questions’ with solutions enabled by its lifestyle-transforming AI technologies”—Kim Il-doo, CEO of Kakao Brain

How to get started?

To start using TPU VM, you can follow one of our quick starts or tutorials. If you are new to TPUs you can explore our concepts deep-dives and system architecture. We strive to make Cloud TPUs – Google’s advanced AI infrastructure – universally useful and accessible.