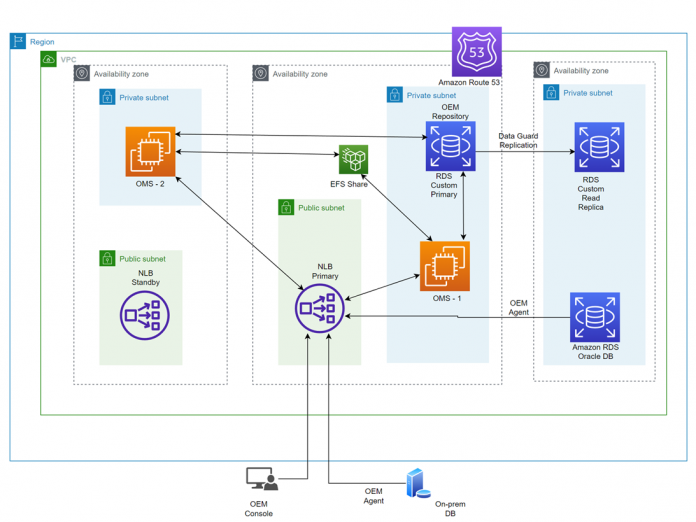 As you migrate Oracle workloads to AWS, you may want to implement Oracle Enterprise Manager (OEM) Cloud Control, Oracle’s management platform, which provides a single pane of glass for managing Oracle environments.

The downtime or outage of any OEM service component impacts the monitoring of all targets, which includes on-premises databases and databases running in the AWS Cloud that you’re monitoring.

If you have more than 25 concurrent OEM user sessions, more than 100 OEM agents, or more than 1,000 OEM targets, then Oracle recommends using a medium or large OEM configuration, which requires high availability.

For a large organization, you can efficiently monitor thousands of targets, because each component of the monitored target becomes a separate target, such as a database, listener, database host, or OEM agent. If you undersize your OEM environment, you may experience performance problems with your monitoring solution.

However, if you use the traditional OEM Level 3 HA on AWS architecture under the Restricted Use License for OEM, then it may not cover the licensing required for high availability features. Based on Oracle’s recommended sizing, you may need to purchase Oracle Enterprise Edition Database. Additional Oracle database licenses may be required due to the implementation of an Oracle Data Guard environment.

You are responsible for making sure you have the proper Oracle licenses to run your workloads.

For OEM medium and large environments, this architecture contains the following components:

An RDS Custom for Oracle database is created along with a read replica in another Availability Zone in the same Region to support OMR HA. The data in OMR is replicated using Oracle Data Guard to protect against database failure.

OMS is installed on two EC2 servers to provide HA for the OMS application layer. Both servers connect to the same OMR database. They share an Amazon EFS mount to share software library files.

The OEM console can access OEM via the Network Load Balancer, providing HA for the console.

Complete the following steps to deploy the OEM HA architecture:

Create an RDS Custom for Oracle database in one Availability Zone of the Region chosen for the deployment of the OEM HA architecture.
Create a read replica of the RDS Custom for Oracle database you created in a different Availability Zone of the same Region where the primary database is hosted from step 1.
Following screenshot shows RDS Custom for Oracle primary and read replica databases.
Create a private zone in Route 53 DNS to add a CNAME entry for the OMR database you created.
You use the DNS name of the repository database while configuring OMS servers in later steps. This provides flexibility of switching or failing over between the read replica and primary repository database without changing the OMS configuration.The following screenshot shows routing entry in Route 53 DNS.

Follow the instructions for OEM installation and add a second OMS as per the instructions in Installing additional Oracle Management Service.
Apply necessary OEM 13.5 patches to the latest patch level.
Make sure that you are able to access the OEM console from both OMS server URLs before provisioning a Network Load Balancer.
Provision a Network Load Balancer in the same Availability Zones where the OMS EC2 servers are located.
The following screenshot shows settings for the NLB.
Add the listeners to the NLB for ports 7803, 4903 and 3872, and create a target group for the load balancer that maps to the OMS servers running on two EC2 instances. Use the following configuration:
Use the IPs option to choose the OMS EC2 instances.
Create two target groups: one for agent uploads and one for the OEM console.
Provide a name for the target group and choose the VPC where the EC2 instances are running.
Choose HTTP1 protocol for target communication.
Use the default health check.
Choose EC2 instances that are running OMS and use ports 7803, 4903 and 3872 to register targets.
For the OEM-agents target group, set Stickiness as Enabled and Preserve client IP addresses as Disabled.
For the OEM-console target group, set Stickiness as Enabled and Preserve client IP addresses as Enabled.

Following screenshot shows listener set up in the NLB.

At this time, OEM agents running on OMS servers are uploading directly to the OMS and not through the Network Load Balancer.

Secure OMS on each OMS server along with agent configuration changes:

Verify that OMS is now locked to accept data via the Network Load Balancer URL.

Unlock the console for uploads.

$ $OMS_HOME/bin/emctl secure unlock – this only unlocks ports for uploads, and OMS remains secure

After you secure OMS on both servers, the agents running on them need to be re-secured with the new upload URL of the Network Load Balancer:

The OEM console should now be accessible via the Network Load Balancer URL and all targets should show as green or online on the console.

Change all agents for all targets to secure them using the same command to verify that they’re uploading data to the OMS via the Network Load Balancer.

To test high availability for OEM OMS and the OEM repository database in RDS Custom for Oracle, complete the following steps:

Stop one OMS running on the EC2 server and continue to access the OEM console via the Network Load Balancer URL:

The OEM agents from the targets will continue to upload the data via the Network Load Balancer, and they will show as online on the OEM console.

Now you can restart the OMS that was shut down, shut down the other OMS, and observe the same behavior to test HA.

After the DNS change, start both OMS servers:

If you followed along and won’t be using this architecture, make sure you remove the following resources to avoid costs :

In this post, we showed you how to build a robust architecture with AWS to run Oracle Enterprise Manager, which can provide high availability for Oracle Management Service and Oracle Management Repository. This architecture not only provides HA but is also scalable as your organization grows its workload of monitored targets.

Sachin Vaidya is a Database Specialist Solutions Architect. He works with AWS customers to provide guidance and technical assistance on database projects, helping them improve the value of their solutions when using AWS.

How to Handle Nulls in Formulas | Best Practices